When it comes to scissors, the key need is that they cut well. Also, they should look decent — ugly tools create drag.

There are lots of options to chose from, but I use these Westcott Titanium Scissors, and they work great: 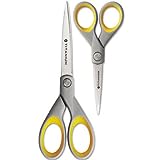 The first thing to say about letter openers is that you should have one. I never even knew they existed until about 2 years into our marriage, when we went to Africa and bought one as a souvenir. I still use that same one, and it works great.

Anyway, before I knew they existed opening the mail was more work than it had to be. So if you don’t have one, I recommend getting one — even if you don’t get much physical mail any more. Even if you just have to use it once in a while, it is still worth it.

It looks like there’s one that corresponds to the above scissors; in fact, you can get it in a package set with the scissors: 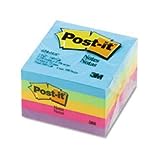 When it comes to post-its, there are three things to remember.

First, don’t use them to keep track of action items. Post-its are a poorly organized system for managing what you have to do, let alone prioritizing it. It’s hard to even remember to look at the post-its with various tasks written on them, scattered all over.

So avoid this practice. Manage to-do items in a task management system. Capture them in a journal, such as the moleskine journal I blogged on earlier, or on a paper pad. If you use a paper pad to capture items, tear the sheet off and toss it into your inbox to be processed.

And if you do ever use a post-it to capture an action item, don’t leave it on your desk as a reminder. Toss it into your inbox to be processed, just like anything else.

Now, second, if post-its are not good for managing or capturing to-dos, then what are they for? They are for providing temporary labels.

Now, these temporary labels might consist of or imply action items. But the key here is that you are labeling something, not just using the post-it by itself as an action reminder. You are labeling a stack or something like that which is serving as support material, and the post-it reminds you what it pertains to.

This still does not substitute for using your task management system to manage the wider task that the stack pertains to, if it is longer than a quick action. I’ll give some examples of how I use them to illustrate.

Let’s say I create an expense report and it needs to be signed by someone for approval. I’ll put a post-it on the report saying “sign” and put it in the person’s box. The point of the post-it is that it lets them know what they are supposed to do. As this illustrates, one of the core uses of a post-it is to delegate.

For another example, let’s say I’m at home processing my inbox. In there are two printed out articles that I read and want to keep on file physically at work. In this case, I’ll write on a post-it the category to file them in and stick the post-it on them. Then I’ll put them into my briefcase. When I get to work and pull them out, the post-it tells me right away what to do with them. I don’t have to re-think where they need to be filed.

The third thing to remember when it comes to post-its is the size. Get the ordinary 3×3 inch size. The smaller size, for example, is just hard to use. Above all, don’t get fancy shapes. The fancy shapes are annoying and even harder to use than the small-sized ones. (In my view, at least!)

I suppose a word on color: get packs of multiple colors. I try to avoid yellow. Even though yellow is the standard color for post-its, I find it a bit too bland. So I suggest getting the 5-pack of varied colors.

Posts in This Series